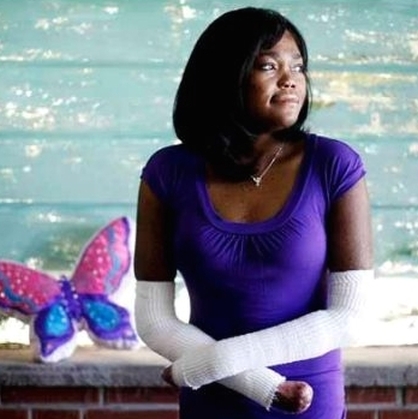 My name is Novelette Munroe. I graduated with honours at the University of Toronto Scarborough Campus with an Humanities degree and a specialist in philosophy. When I was 12 years old I developed an avid interest in writing poetry to vent my frustrations with life. Over time, I began to take my writing seriously and submitted poems for contests resulting in my work being published in several different creative writing journals. During my years spent at UTSC I had work published in the school’s creative journal the Scarborough Fair

Later, in my final year at University of Toronto, Scarborough Campus (UTSC), I was given the honour of winning the creative writing award for my poem A Real Fairytale. Since then I have successfully written and published a sold out small chapbook with the publishing company, Anstruther Press, titled: Of a Wingless Woman…

Throughout my years at camp, I have developed an appreciation for the bond and friendship that having people with EB around you can provide in your life. I have been very fortunate to have many dear friends with EB from my camp experience. Even though they are mostly all in heaven now, due to complications with EB, I take the experience that we’ve had together and the bond we’ve shared in hopes to continue to help to spread that amongst the EB community.

It was through our bond that we also were a part of United Survivors of Epidermolysis Bullosa - an organization developed by my friend and honorary big sister Jamie Hartley, dedicated to helping people with EB become more self-reliant. I have been on the board from the began in the mid 2000s until it ended this year.

I think EB organization abroad and here in Canada are very important. My childhood dream has always been to learn how to drive. Debra Canada has made that dream a reality and more. Not only did they help pay for driving lessons but the MAF program helped to get me back on my feet after my vehicle was totalled by someone running a red light. They helped me to get a new car modified so I could drive safely and comfortably. I also now have a lift for my power wheelchair that I never had in my previous vehicle. It’s been great to now be able to get around on my own with my wheelchair and go shopping and not have to worry about my feet getting sore. Now I have the freedom and independence that driving and getting around in my power chair provides.

Last year, I was given the opportunity to participate in Bella’s Ball which is a DEBRA Canada Fundraising and Awareness event which took place in on Grouse Mountain in North Vancouver, BC. It was an amazing opportunity not only because I got to travel Canada, outside Ontario, for the first time; but it was also a great opportunity to meet other Canadian families with EB. If it were not for DEBRA Canada the opportunity would not exist. Instead, I would have to venture outside of Canada to meet other EB families like I have in the past.